Well, Humanoids, the Big Game has come and gone. You survived the hangover, the half-hearted conversations about commercials that you half-remember, and a game the Denver Broncos would rather forget altogether. And in the wake of the drug-induced demise of actor Phillip Seymour Hoffman, the offerings from Monday’s newsfeeds kept your glazed-over eyes company after you barely mustered the energy to return to the office job that you hate.

Still, there are some stories that you didn’t find in your go-to rotation of safe-for-work websites. So Marz Daily Media is doing the good thing, the right thing, the AMERICAN thing, by providing a digest of all the Super Bowl stories you missed, stories tailor-made for clear eyes and full hearts, stories that were crafted to keep the Procrasti-Nation strong and the corporate clutches on your soul weak. Enjoy your week, Humanoids.

NEWARK, NJ—High-level Fox Sports staff decided to have their own post-game festivities by flying in a squadron of elite ‘massage therapists’ of unasked Asian descent to visit their hotel (the hotel threatened to sue if the name was disclosed). Poised for a veritable round-robin of rapacious ribaldry, the men in charge of guiding the commentators, frolicked about the top floor of the hotel, which they had rented out completely, in utter elation that they would likely not receive angry letters following the broadcast.

While prancing between hotel rooms, the head of Fox Sports Standards and Practices, checked in under the name ‘Golden Taint,’ took a moment to explain the joy felt by all:

“We told them not to say ‘Beast Mode,’ for fear of upsetting the sensitive Blacks and the neo-hippie liberals, and they didn’t slip up once. We’ve come a long way since the dreaded wardrobe malfunction of 2004. Crackers were all out of sorts about black titties that year.” Beast Mode, of course, is a phrase used in reference to Seattle Seahawks running back Marshawn Lynch when he is playing exceptionally well. But Fox S&P rightly understood the sensitivity of using the term ‘beast’ in connection to a black man known for his brute physicality, no matter how well-paid. “It’s like one of those things you have to accept,” Taint continued, “it’s like they can say it but we really shouldn’t. I can’t stay; I think Ling Mao or Sun Yee or whatever the hell her name is really digs me.”

With Launch of Resealable Bottles, Bud Light Orders Skyrocket For People Who Hate Themselves

You know, because nothing beats drinking piss but the kind you can come back to later.

All kidding aside, though, had Bud Light kept it real and said, “Hey, it’s much more risky to roofie a beer that you have to unscrew. Check us out; we’re doing our part,” maybe people would have forgiven that this new feature was added to keep shilling cheap, unremarkable beer. Instead, the country shakes its head over how poorly $3M can be spent.

As poor taste as it is to make light of death, and as averse to the New York Post as I am, “Idiot! I’m a f___ing idiot!” with the matching screenshot from Boogie Nights is a fitting message to everyone struggling with or contemplating the use of heroin.

On-location reporters conducted the study at Newark Penn Station in travelers clearly displaying their allegiance to either the Denver Broncos or Seattle Seahawks. The clear divide in opinion over whether New Jersey Transit was prepared for the increase in weekend commuters seemed to be based on whether a given fan’s team had won, ultimately confirming that sports fanaticism and objectivity can never coexist.

Websites that specialize in animal-on-animal action have since also experienced a significant increase in subscriptions, some sites even offering special ‘Coming out of the barn’ discounts to commemorate what @FurryFlynt has called “a watershed moment where the once deviant desires of a silent minority have been embraced by America. It was only a matter of time after that biracial Cheerios thing came back. Am I right?”

Amidst A Room of Haters, Previously Ambivalent Man Comes Around To Bruno Mars

This one’s actually true. Generally, I don’t even like the Super Bowl Halftime Show. In fact, I used last year’s Destiny’s Child reunion as an opportunity to alter my state in another room. But this year, I caught myself watching a small man with a pompadour banging away at a drum kit like a glittery male Janelle Monáe. The program continued with a selection of song-and-dance numbers, where Bruno Mars made his best effort to fuse his talent with that of the greats who’ve come before him.

What I heard in the background of this Super Bowl party was a mélange of comments about which legendary artists of whom Mars is derivative. In fairness, he was likely paying homage to performers like James Brown and Jackie Wilson by design. But my assumption did not to influence the bandwagon of backhanded criticism of a guy who has worked hard and made the most out of his shot at greatness. I still don’t much care for that song that’s most popular right now, which he performed, but I learned enough about his aesthetic and work ethic to give him a shot…instead of being an MC Gusto-esque hater…because you know that “this bitch gets all the bitches.” He do.

Never has a score of 2-1 been so tense than in the Eli vs Peyton Super Bowl ring race. Even coming from a family of winners, when the kid brother bests his elder in America’s most high-profile sporting event, there’s no way that Thanksgiving and Christmas will not be without at least one major blowup. Eli may take it easy on his big brother considering how thoroughly the Seattle Seahawks whooped Peyton’s Broncos, but there may come a point when Peyton’s brotherly bullying goes too far, and Eli flips him the double bird, displaying a championship ring on each one.

Mama and Papa Manning may want to swap out the good china for some Chinet come November.

I’m not surprised. Did you see that coat? 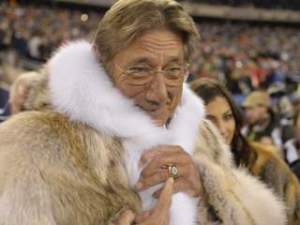