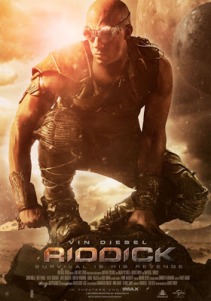 No Judi Dench, no problem. After leaving fans hanging for about 10 years, writer/director David Twohy proved the wait worth it with Riddick. The third installment of the series that was launched with Pitch Black in 2000, Riddick returns to the series’ original form using the familiar ‘man versus strange beast’ sci-fi premise. In Riddick, the titular anti-hero is marooned on what he expects to be his home planet Furya, but turns out to be someplace altogether different. When he sends a distress signal—identifying himself throughout the universe as an escaped convict—2 groups answer the call: a mercenary ship looking to collect the bounty on Riddick’s head (literally) and a more official unit in search of answers only Riddick can provide.

As in Pitch Black, Twohy employs unlikely alliances, and the tensions that arise from them, despite a more imminent yet less understood threat. And in so doing, Twohy demonstrates that although it can be fun to see one man take on an army (see Necromongers), Vin Diesel‘s portrayal of Riddick is better served by his preference for self-preservation over compassion, which Twohy veered away from in 2004’s The Chronicles of Riddick.

But to his credit, Twohy uses Riddick (in voice over, alas) to channel the regrets of the last adventure from Riddick’s point of view, citing that becoming civilized was a weakness rather than a virtue. In real-world terms, Twohy getting civilized came in the form of $105M budget to follow up Pitch Black, which cost $23M to make. So the $38M for Riddick would, of course, feel like a homecoming in terms of Hollywood storytelling that does more with less.

Consequently, the return to a more primal, survivalist dynamic throughout this latest story plays to the strengths of the genre while allowing the auteur Twohy to stay within his zone and not be spread as thin as his many responsibilities might demand. However, the movie has a less suspenseful ending than The Chronicles of Riddick, which all but promised a sequel. Even to diehard Riddick fans, a conclusion without the hint of continuation may disappoint, but it would be difficult to argue that Twohy did not deliver a solid story consistent with the work that put Vin Diesel on the map.

And now that the formal review is out of the way, here is What I Learned at Riddick:

You know those Sexiest Women Alive lists featured everywhere from Men’s Health to Us Weekly? While I don’t advocate the ranking of women based on superficial criteria by anyone, my distaste for the pastime has officially reached its limit. That Katee Sackhoff doesn’t even rank in the top 100 of any of the more popular lists of that kind clearly indicates that what the mainstream considers sexy or beautiful has nothing to do with a woman’s ability to kick serious ass.

Sackhoff became the dream girl of many Battlestar Galactica fanatics as Starbuck, and continues to elicit swoons as Deputy Vic Moretti on Longmire. In Riddick, she plays Dahl, the lone female on a gun-toting crew charged with finding one of the most dangerous men in the universe. And she turns out to be one of the most ironically named characters in movie history because she does NOT play around.

Although Twohy sexualizes Dahl in ways both crude and gratuitous, the character was able to maintain her strength as someone everyone believed could hold her own. And the one boob she exposes briefly in Riddick beats any ‘accidental’ topless tweet from anyone who routinely ranks on those bullshit top-100 lists, mostly because that boob comes with the knowledge that Sackhoff gets paid to pretend to punch men in the face for a living without her femininity coming into question. Ungh!

People should give Affleck’s Batman a chance

Who can forget Fred O’Bannion, the repeat senior that no one liked in Dazed and Confused? Well I remember thinking, “Man, that guy sure is a dick.” And for Ben Affleck, that may have been the best compliment he could receive as an actor. Throughout his career, Affleck has played a fairly wide range of roles, but playing a bull-headed, antagonistic jerk is where he truly shines.

And isn’t it about time we saw that side of The Dark Knight? Aren’t you tired of Bruce Wayne as the sympathetic orphan who exacts both criminal and social justice through his wealth? Isn’t it just as possible for a guy with that much power to develop a complex that would make him the kind of guy only an old British man and an underdeveloped acrobat can tolerate? And with how wholesome we’ve known Superman to be, putting those heroes together in one movie would demand a bit of personality friction for the story to be any fun, right?

Let’s just hope that in the Man of Steel sequel, Batman shows up to the Daily Planet, kicks the door open, finds Clark Kent, and says, “You ready to bust some ass?”

Sandra Bullock’s latest drama is her funniest work to date

Okay, so I didn’t see The Heat, and I’m not trying to undermine Bullock’s other comedic performances, but if you can watch the trailer for Gravity, where she costars with George Clooney, and not laugh as she whirls around panic-stricken in space while Clooney tries help her over a radio, then you’re taking movies way too seriously.

Admittedly, my response would be different if the trailer didn’t rest on the assumption that the basic pitch (Clooney and Bullock in space) would be enough to draw an audience. They get points for making suspense hilarious, I guess.

Samuel L. Jackson with processed hair? Check. Gary Oldman being all smart and doctorish? Check. Michael Keaton talking? Check. Before you even get to the next-gen updates sure to come with the remake of Robocop, Columbia Pictures was not screwing around as far as building a strong cast around a concept that has already made 80s babies wonder why Hollywood continues to wipe its collective ass with their collective childhood.

This movie could be a shot-for-shot copy of the original and still stand out because of the cast. But knowing that in 1987, a machine that could hold thousands of songs would take up an entire wall is just one example of how the dam of possibilities for a still far-fetched concept are about to blow wide open…in the form of a humanoid robot cop whose holster is his left leg.

Blurred Lines MUST BE STOPPED

So a lot of people, including the 20 middle-aged women in the Zumba class at my gym, don’t care how rapey Robin Thicke’s Blurred Lines is. And I’ll admit that it would be unfair to single out one song as everything that’s wrong with gender politics on this planet. But there were some unnerving energy overlaps with the song and Riddick that contribute to a culture hell-bent on controlling women.

For instance, the abovementioned Dahl says she’s a lesbian to combat the advances of an overzealous…er…asshole. Later in the movie, Riddick proceeds to get pretty graphic about the things he would do to Dahl, to which she does not reiterate her orientation. Instead, we are to assume that in her relative lack of disgust in this other context, that she’s complicit. And this chain of events raises 2 questions: 1) did Dahl lie about being a lesbian so that the first guy would back off? Or 2) is Riddick just so damn smooth that when talking about going “balls deep” in a woman, even a lesbian has to wonder whether it would be worth switching sides?

Following that exchange is an intimately suggestive moment that Dahl and Riddick share, at which point it becomes clear that one thing this movie is NOT is a lesson in causality as it relates to acceptable courtship behavior. And neither is Blurred Lines. My apologies, but I don’t “know you want it” until you actually say so. If that makes me less of a stone cold player than everyone’s favorite Furyan, then I guess I’ll be on the bleachers with the rest of the dorks drinking my unspiked punch.