Reinvention: an integral theme to the American experience. In a world where upward mobility comes at the expense of the weak, Showtime’s Ray Donovan depicts the myriad conditions under which we as Americans chase the Dream, compromising our selves in the process. 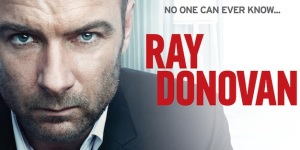 The titular character and his father Mickey provide the thematic nucleus for the show. And although viewers would consider Ray the protagonist, ensuing episodes reveal that he may not be the flawed hero he is expected to be. Rather, the smoldering conflict between Ray and Mickey suggests that Ray may be more of a bad guy than the one he views his father as. At the start most viewers give Ray, the stoic yet dutiful husband and brother, the benefit of the doubt because all of his objectionable responsibilities, which include intimidation, blackmail, and cover-ups, are committed against relatively less likeable characters. But as clues to Ray’s past emerge, the sympathetic edge swings in favor of his father Mickey, an equally flawed yet more genuine foe. The inability to make classic good guy/bad guy judgments of these characters, therefore, reflects the gray area that many Americans dwell in order to survive, where perspective and context are crucial in interpreting the good or evil of others.

Parallels between the real American experience and the series are evident even in the environment in which the story is set. The upper-class underbelly of Los Angeles aptly frames series creator Ann Biderman’s core theme because the real-life city promises reinvention of the highest order for everyone who ventures there. And in the context of the series, everyone in Ray’s family, including Mickey, struggles with the ability to reclaim and reshape their lives in spite of their pasts. Ray’s wife Abby, for example, unapologetically clings to her marriage and children as her ultimate escape from South Boston. Ray’s younger brother Bunchy has a different struggle—to move past the trauma of sexual molestation—but his self-destructive escapism differs little from the other characters’ basic inner conflicts.

As for Mickey, who spent 20 years in prison “for no good reason,” each episode features him trying to reconnect with the lives that were kept from him by his son Ray. What may appear to be an attempted continuation of the seedy life Mickey had before he went to prison may also be an attempt to make amends with the people he cares about (in his own violent and ribald way). Similarly, within the real American fabric lies a constant reconciliation with the human suffering that led to the ways of life available today. And through media and politics, the battle continues over who truly has rights to the pursuit of happiness. In that sense, many Americans may identify more with Mickey, the culturally insensitive yet oddly tolerant free spirit, than Ray, an enforcer for Hollywood’s rich whose loyalty serves people with whom most Americans cannot identify.

By the time the story reaches its climax, viewers will have a clearer sense of who the main characters, Ray and Mickey, really are. And by then, where audience allegiances lie may be polarizing in more interesting ways than any television drama to come before it. With Ray Donovan, Biderman posits that works of fiction can be strong without the absolute good and evil dichotomy that audiences are used to, just as it is unwise to place those absolutes on real people without knowing more of their story than is immediately available. Perhaps the narrative, in addition to being riveting entertainment, will resonate with people who need to recognize that our identities are a function of the lives we touch, no matter how we try to deny the importance of those connections.