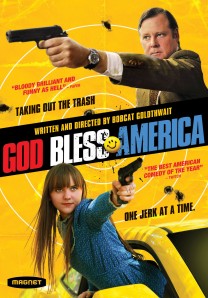 Between overly sensationalized news and the borderline worship of reality television, American citizens, regardless of their political or religious leanings, would agree that the nation’s dependence on the media has contributed to societal decay. Ironically, the devices that could unite Americans (television, the Internet, church, etc.) have exposed the ugly, more divisive side of humanity. In God Bless America, director Bobcat Goldthwait exposes this reality in a dark satire that provides a cathartic adventure that releases the tension many disaffected Americans feel in response to the world made noisy by religious fanatics, TV personalities, and the generally unkind.

God Bless America tells the story of Frank (Joel Murray), a divorced pushover whose terminal illness prompts him to realize fantasies in which he exacts revenge against those who exemplify what he sees as wrong with society. And joining him is Roxy (Tara Lynne Barr), a high school girl with just as much displeasure with the world as Frank does. Although their motivations differ slightly, their resolve to exercise their license to cleanse never waivers enough to call into question whether they, in the eyes of the audience, are doing the right thing.

Fortunately, the potential awkwardness of Frank and Roxy’s relationship is addressed early and honestly enough to not distract from the pure bond that they share. Now more than ever, middle-aged men hanging out with teenaged girls is immediately questionable, but Goldthwait’s precise storytelling and forgivably preachy dialogue confirms that the story isn’t about an unlikely romance. Rather, it is about what happens when two people grow intolerant of Americans that have been conditioned to stop caring for one another and have instead to find pleasure in the hatred and ridicule of those less fortunate, along with the deification of morally bankrupt and intellectually vacant strangers.

Fans of 1980s stand-up comedy may find it hard to believe that Goldthwait, the once outrageous and drugged-out wild man, would champion the stance with which he endows Frank and Roxy, if only because the stance is coherent. But what the audience sees is an arrival to a radical maturity that makes Goldthwait a rather credible source for the message of this film: that America has lost its way, and it will be virtually impossible to find it again; so if we’re screwed anyway, why not try to take out as many awful people as we can until our time is up?

Although fundamentalism of any kind is not ideal, it certainly is a relief to see it fictitiously realized when you agree with it. Of course, people of all sociopolitical stances could say this, and therein lies the impasse at which humanity finds itself. And although the media may not be entirely culpable for creating the ideological rifts among races, religions, political parties, and Teams Edward and Jacob, it certainly nurtures the fear and insecurity that unfortunately drives many of us to forget that we are all people who want and can have the same things. Goldthwait’s story is likely a reminder that will be missed by most. But, as with any other noble cause, that doesn’t mean that we stop trying.