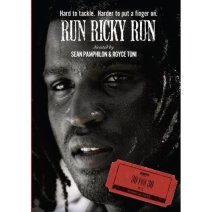 For sports fans interested in learning more about one of this generation’s more enigmatic athletes, Run Ricky Run fulfills the fall-from-grace/road-to-redemption plot that audiences have come to expect over the last millennia of storytelling. What people may not have expected (ESPN execs included) was this ‘30 for 30’ documentary exposing the predatory spirit that the sports media disguises as journalism and the unhealthy obsession that fans have with athletes, for whom they express a passion that should only be reserved for closest family or sworn enemies.

In the case of running back Ricky Williams‘s turbulent career, respected voices of sports news used their lack of access as an opportunity to demonize a man whose unclear agenda betrayed the simple appetite of the American sports fan. Instead of allowing Williams to fade into self-induced obscurity in hopes of eventually learning the whole truth, ESPN reporters like Michael Wilbon and Skip Bayless opted to assassinate the character of a man who “would rather smoke pot than play football.” Such an offense for the less than superhuman would hardly elicit such vitriol, but Williams’s role in a multi-billion-dollar industry placed him in the precarious position of heightened accountability and constant risk of crucifixion. And director Sam Pamphilon provided an unbiased account of what happens when a pro athlete fails to uphold the standards set by non-pro athletes, some of which have never excelled in football on any level (not even Rookie in Madden).

The scrutiny of Williams as a gridiron warrior gone AWOL harkens back to the pressures endured by enslaved combatants of the Roman Coliseum, always ‘playing’ for the high stake of survival. In present day, it appears as if the sports media and fans alike have absolved themselves of savage spectatorship because athletes make boatloads of money. And when Williams dared to redefine happiness by betraying that reward system, such an insult led to a collective thumb’s down to seal his fate. The same people who once loved him would have then cheered as his dead body got dragged through the streets.

The title of Pamphilon’s film also echoes a more recent slave culture, as captured in song by a 1920s band called The Skillet Lickers:

“Nigger run, run so fast
Stoved his head in a hornets nest”

Ricky Williams’s unreal ability to score touchdowns certainly did increase the pressure on his mental health in a world of angry suits that create a buzz as easily as they breathe.

“Oh nigger run and nigger flew
Why in the devil can’t a white man, too?”

If you think that race had nothing to do with the abuse Ricky Williams took in the media for squandering the abilities that journalists wished they had, then you don’t know America.

In Ricky Williams’s journey to explore inward through holistic medicine and meditation, he did find a sense of freedom that he hadn’t before experienced.

“Nigger run, run so fast
Nigger, he got away at last”

This lyric was a false positive in the 1920s and continues to be. The sports industrial complex eventually welcomed Williams back into the fold, where it continues to exploit his skills for their gain. Slavery’s nominal end in the mid-19th Century has led to more creative tactics to maximize gains while minimizing compensation in every enterprise, regardless of the race of the workforce. But major American sports, which primarily employ minorities of the African diaspora, exemplifies of how freedom as defined by the establishment is a dubious freedom with which even super humans like Williams must ultimately contend.

Pamphilon’s unbiased account of Williams’s journey (Williams wouldn’t have it any other way, apparently) allowed sports fans into Williams’s world, which certainly added dimension to their understanding of the man who was once simply projected as the greatest running back of all time. Yet in granting this access to Ricky Williams as a complete individual, Pamphilon sated sports fans while successfully exposing the savagery of fandom and the sports media that instigates it. Ricky Williams is just one of many who have been torn down by a system to which he’s given his life. And with ESPN being a massive cog in this system, it is clear that allowing a documentary like Run Ricky Run to expose the violations of which it is guilty demonstrates how powerful the system is, impervious to even the most spot-on criticism.

Perhaps, but the freedom to point out the truth without consequence is better than a world where you can’t point it out at all without being fed to actual lions, right? Right?