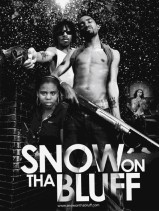 Since the mid-1990s, charges of glorifying violence have become virtually indefensible as rap artists and filmmakers continued to capitalize handsomely on it. And mixing this trend with gross displays of wealth and morally bankrupt depictions of women gave the entertainment industry an irresistible recipe for profit at the nonrefundable expense of spiritual and emotional decay among the poor. Or, more directly, the industry “dressed it up and made it seem sweet.”

Apparently Goodie Mob aren’t the only Atlanta-based street documentarians with no interest in depicting street life as fun. Director Damon Russell has taken street reporting to a level never before seen in American film with Snow on tha Bluff. Described by Netflix as “hyperreal,” the film follows Curtis Snow, a crack dealer from one of Atlanta’s most dangerous areas, as he documents his criminal lifestyle with a stolen video camera.

The autobiographical framework of the story allows this charismatic dealer and stick-up man to celebrate his life more than its true surroundings would justify. However, the narrative ultimately strips away the bizarre glamor of a ‘gangsta’ movie, leaving an emotional dimension that precludes dehumanizing the characters, as happens so often in films remotely of this ill. The audience is forced to see past the posturing characteristic of young black men in poor communities and get an authentic depiction of the vulnerable ugliness that the environment perpetuates.

Unfortunately, though, as important a statement as this film makes—that there is still a need to show a side of America that is unjustly romanticized as quickly as it is dismissed by the mainstream—there should be some serious concern about the impact of this film’s success. As with all art forms and trends developed in socially disadvantaged environments, this film may spawn copycats that cancel out the original message. Snow on tha Bluff took the 2011 film festival circuit by storm, earning Best Feature Film honors in both the Atlanta Underground Film Festival and the Chicago Underground Film Festival. And with continued momentum, the paradox of this film’s growing popularity may echo that of punk rock, hip-hop, and other sub-cultural styles and voices that have since been misappropriated and commoditized within an inch of their legitimacy.

In a Hollywood executive’s office, Snow on tha Bluff would have been pitched as ‘Blair Witch Project meets City of God.’ Hopefully the projected profitability of that combination will prove unworthy of repeat attempts, because the day when areas like The Bluff become more attractive to young people throughout the country would truly be a sad one…well…not for the entertainment industry, but you know…