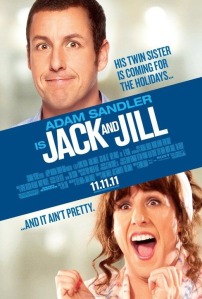 As Americans have grown more and more disenchanted with the political climate and manipulated by mainstream media, comedians like Jon Stewart and Stephen Colbert have worked tirelessly to expose politicians and news networks that force-feed hypocrisy, hate, and fear. The Daily Show and The Colbert Report have built reputations for taking to task the people responsible for protecting our rights as citizens who instead continue to ignore humanity and social responsibility in the interest of systemic individual greed.

Among comedians with high-profile outlets for their work—and, dare I say, art—Colbert and Stewart represent a stylistic and intellectual minority, while comedians from shows like Saturday Night Live have corporate limitations that essentially demand that they cater primarily to the lowest common denominator. However, with the release of the new comedy Jack & Jill, it appears that the pool of comedians who provide social commentary may have acquired one of the richest comedians in Hollywood.

SNL alum Adam Sandler wrote and stars in this new film about Jack Sadelstein, the owner of an advertising agency who must contend with a houseguest who won’t leave: his loud, annoying twin sister Jill. Considering that Sandler plays both titular roles—a la Eddie Murphy’s multi-character performances in Coming to America and The Nutty Professor—director Dennis Dugan appears to have made a slapstick, low-brow comedy perfect for helping stressed out Americans escape their problems for a couple of hours. But against the backdrop of our current socio-political climate, the film’s deeper aim becomes apparent: Dugan and Sandler created a metaphor for the complicated relationship that the infamous ‘1%’ has with the remaining 99.

One indication of the film’s bold admission of America’s codependence on corporations is the prominence of its product placements. While most movies contain subtle use of commercial brands (e.g. a fatty drinking a Pepsi, a hippie driving a Prius), Jack & Jill integrates its sponsorships into the plot. For instance, when the Sadelstein family goes on a Royal Caribbean Cruise, the scene when they board the ship looks more like a big-budget commercial than a scene for continuity. And the film’s conclusion features a fictional Dunkin Donuts commercial (which winds up being a real Dunkin Donuts commercial by virtue of it being shown to the public). Throw in that the star of this ad is none other than Al Pacino, and Dunkin Donuts has one of the biggest meta-referential advertisements in the history of media. Partnerships like the ones Happy Madison formed with Dunkin Donuts and Royal Caribbean Cruise Line are the reason why Sandler’s production company could virtually guarantee a financial gain even if Jack & Jill tanks at the box office. To say that Sandler protected his investment would be like saying Lindsay Lohan likes to party from time to time.

Speaking of random references to celebrities, the other device confirming Sandler’s metaphor is the many A- to C-list appearances throughout the film. While no audience should be surprised to see fellow SNLers Tim Meadows, David Spade, and Dana Carvey (in his first onscreen film performance in 9 years), Hollywood kings like Pacino and Johnny Depp gracing the screen guarantee at least 1 ‘WTF’ moment in the movie. Depp and Pacino’s scene from courtside at the Lakers game goes from surprise to complete bewilderment when Pacino’s role (as himself) becomes a key story element in which he relentlessly tries to woo Jill. But if you look closely at this who’s who in random what the f___ery—which also includes Shaquille O’Neal (in the only true laugh-out-loud moment), Michael Irvin, and Bruce Kardashian (nee Jenner)—it demonstrates that the world of celebrity is an insular one, far removed from that of everyday people.

This social divide that Sandler depicts strikes an eerie parallel to the rift between America’s elite and the rest of the population that does most of the work to keep this country going. Sandler does not go so far as to demonize the world in which Jack Sadelstein strives to cement himself, but he takes an artist’s stance by holding up a mirror to the harsh disparity that the powers that be would rather the rest of us accept without question. So while on the surface, the many cameos throughout this film look like Sandler is saying, “Hey! Look at me! I’m filthy rich and famous people think I’m cool enough to be in my movie” (which is true), on a deeper level he is provoking audiences to acknowledge social rifts, using comedy as a subliminal vehicle.

If shameless commercialism and Hollywood elitism were not enough to demonstrate Sandler’s backhanded satire, his title characters actually embody the all-too-familiar 1% vs 99% conflict. Since Sandler has built his career on dim-witted characters with hearts of gold, to identify Jack with neo-conservative greed seems like an absurd stretch. But Sandler’s power to disarm audiences is what puts millions of unsuspecting moviegoers at mercy of the dynamic that he and Dugan have set out to recreate.

Take Jack, for example. He has a great house and a healthy family (including a wife played by Katie Holmes [who is actually quite hot for a robot]). And although it seems like the connections Jack has made in the advertising business should guarantee a stable stream of business, his agency has the same desperate male-dominated, ‘More for us, and screw everyone else’ culture not unlike the gamblers on Wall Street and the politicians who’ve forfeited their civic duties to pad their bank accounts and campaign funds.

Conversely, Jill represents all disaffected Americans—male and female (as it turns out)—who have felt misunderstood and unappreciated despite having an indomitable spirit and a love of country too strong to be articulated by a focused socio-political movement. Jill Sadelstein symbolizes hard-working Americans concerned about their futures as well as more extreme demonstrators of said concern, such as the oft-nonsensical Tea Party and the too-inclusive-to-be-ultimately-effective Occupy movement. For instance, one of Jill’s first lines in the movie, “WHERE WERE YOU?!,” echoes the way Americans have felt about politicians who stood idly by while banks and corporations caused homes to lose value, jobs to be outsourced overseas, and retirement plans to switch from 401ks to Powerball tickets.

And the significance of Jill’s pet bird, which frantically repeats that question throughout the movie, should not be overlooked. While it is easy to dismiss the bird’s parroting (the bird is not actually a parrot) as a cheap joke, audience members get a bizarro reenactment of how mainstream media has continually dismissed Occupy protesters, even poking fun at the Occupy movement’s failure to bring about any kind of real change, reducing it to a pesky disturbance.

Leave it to Hollywood’s most nonthreatening comedy juggernaut to use his everyman status (which he’s admirably maintained while being a multi-millionaire) to make an artistic statement about the state of our country in the guise of a goofy, old-hat jokefest. Sandler has done with Jack & Jill what Morgan Spurlock and Michael Moore could not do: attract a widespread audience without bias to expose a system that bias tends to misconstrue. Documentaries are never box office slam dunks, but when they are, you will find that liberals are more inclined to go and see them. Jack & Jill, on the other hand, is Sandler’s way of infiltrating the broken system, for all to see, and trying to change it from within, an admirable effort similar to Warren Buffett’s call to raise taxes on him and his mega-rich friends.

Further, Sandler’s assertion that American citizens are intrinsically dependent on the free market system, and vice versa, might be the closest to a call for transparency that American people will ever get. At this rate, Congress and mainstream media will continue artificially polarizing the issue of class disparity. Until there’s sure money in a “You can’t handle the truth” speech in which some Senator says that without the poor staying poor, we’d have no bargain shopping (e.g. Wal-Mart), ‘class warfare’ will remain the buzzword that keeps hard-working Americans in the dark about how manipulated they have been for decades.

Of course, one movie can only do so much, but Jack & Jill is an excellent example of how selling out—or, more to it, buying in—to Hollywood does not mean an artist cannot do his or her part to expose the American system that that exploits the hard work of many to overcompensate a chosen few, which works as long as the masses remain anesthetized by unfunny movies with racist jokes, broad characters, and famous people who can get away with any crap they commit to film. How’s that for a meta mindf___?

Rotten Tomatoes gave Jack & Jill a score of 0%, a valid score considering how…you know…it’s a terrible comedy. But the man responsible for Billy Madison, The Waterboy, and Big Daddy deserves the benefit of the doubt for making the conscious choice to wrap profound social commentary in a lowbrow package. One such demonstration of this effort is the crafty epilogue to the film, a scene between Pacino and Jack. They are watching the rough cut of the Dunkin Donuts commercial, a cheesy rap-and-dance that Al Pacino wouldn’t be caught dead doing in real life. After they screen the footage, he says, “Burn it.” Pacino might not be breaking the 4th wall with this line, but everyone who’s been sitting through the rest of the movie would infer that Pacino is referring to the whole movie, not just the commercial.

So knowing that Pacino, the respected artist that he is, would comment on this full length farce suggests that a more interesting agenda was in play than Columbia Pictures’ marketing department would have America believe. Ultimately, the $13.50 that I paid to see this movie (I know!) contributes to the same corporate machine that exploits inequality while making us complicit. I think we’ve found the American version of yin and yang.

To borrow a sentiment from legendary New York journalist Jimmy Breslin, America is a country I love and hate equally. And while it’s abhorrent that the socio-political issues here are what they are, at least there is catharsis available in saying something about it. The catch? Some rich bastard will almost always make a buck off of that catharsis. If that’s the price of freedom, I just hope there’s a Groupon for it soon. $13.50? Get outta here.