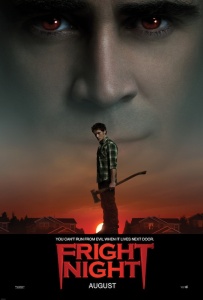 Hollywood seems to love ruining creative work in the interest of making money. So whenever a remake or an adaptation gets announced, predicting that the project will be an insulting shadow of its inspiration is a legitimate stance to take.

But once in a while, a remake or film adaptation comes along that gives audiences hope that the soulless moviemaking metropolis still knows a thing or two about how to make people’s theater experiences worth the ever-skyrocketing prices (almost).

With naturally superior special effects, flawless casting, and a witty script, Craig Gillespie’s Fright Night establishes itself as a generational upgrade that respects the sensibilities of 21st century moviegoers without compromising Tom Holland’s original story. Rife with elements that pay homage to vampire classics of the 1980s (and a quick but sharp dig at some of the drivel made today [eat it, Twilight]), Fright Night demonstrates what happens when people who truly love the first form of a work use their expertise to improve on it without undermining what made the original piece special.

Although the screenplay variations make most comparisons between the Fright Night movies an apples-to-oranges enterprise, the character parallels leave room for the staff (of 1-ish) at Marz Daily Media to inaugurate a mini-feature where we (royal) pit original performances against their later iterations.

Ragsdale’s Brewster embodied the boy-next-door spirit that worked well with the cat-and-mouse interplay between him and Jerry Dandridge. And the helplessness with which he pleads for Peter Vincent’s assistance intensified the gravity of his plight.

But Yelchin’s motivation to play for keeps and make a reformed nerd into an adolescent action hero comes just as honestly as any emotion Ragsdale carried into his scenes. Plus, Yelchin was just more fun to watch.

Forgiving that both incarnations of Dandridge eat apples (probably a clever play on temptation, but it’s always annoying to see vampires eat like the living), Sarandon’s portrayal differs starkly from Farrell’s in that it exudes the classic wisdom of someone who’s been alive for centuries, the same vampire vibe that makes him sexually ambiguous enough to make women swoon.

Meanwhile, Farrell’s younger portrayal employs a more virile sexuality that makes him an immediate threat to Brewster’s late-teen struggle to protect what is his.

As much as nostalgia tips the scales toward Sarandon (or Humperdink, if you prefer), it’s an uphill battle against Farrell, who is far more intimidating and did not need a manservant to maintain his cover. A grown man in a big house with a “roommate” in the 1980s, and no one thought to question it? Cahmaaaaan.

Roddy McDowall (of original Planet of the Apes fame) made Peter Vincent an iconic character among vamp movie diehards. The quirky, skittish quality he brought to many of his great characters worked well as Vincent, the washed up B-movie star turned creature feature show host. David Tennant was correct in calling the shoes he sought to fill “legendary.”

But leave it to the greatest Doctor Who of this generation (or dare I say any) to not only fill those shoes, but also to bring them in to be resoled. Tennant’s Peter Vincent has the luxury of a multi-dimensional investment in the story than McDowall’s, making him a more active (albeit dysfunctional) participant in exacting some undead justice.

And any one of you philistines who wants to reduce Tennant’s performance because of his Russell Brand costume should be slapped in the face. It was a joke, you ninnies.

With no insight into audition rooms or industry politics, Stephen Geoffreys may have been one of the most underrated character actors of the 80s. His portrayal of Evil as Charley’s deserted childhood friend straddles the line between assertiveness and vulnerability. And the way Geoffreys expresses both shows how good actors find ways to make the most out of even the most marginal supporting roles.

Mintz-Plasse, on the other hand, had the luxury of plenty to do, and to say that he took full advantage of his onscreen opportunities in this film would be an understatement. Still the nerd that you expect Mintz-Plasse to be (until he hits a gym and ditches those glasses), the depth to which Evil gives the audience access exposes the sophomoric writing of Mintz-Plasse’s roles in Super Bad, Role Models, and Kick-Ass. While those were fun movies, the hope is that Mintz-Plasse recognizes this role as his best to date because of its marriage of the sympathetic, the hilarious and the creepy.

Amanda Bearse (you know, Marcy Darcy from Married with Children) played the perfect counterpart to Ragsdale’s clean-cut Brewster. But no one will deny that Imogen Poots (you know, the one with the unfortunate name) is an upgrade for her sex appeal (it’s okay, she’s 22 in real life). But Poots’s active role in the battle with Dandridge exemplifies the improved role of female co-stars in this story. 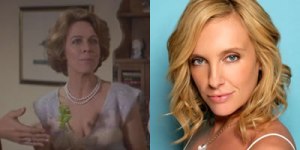 A comparison of screenshots could settle this quickly, but let’s respect our elders, shall we?

Dorothy Fielding’s vulnerability as Charley’s mom is in her choice to spend life as a single mom medicated whenever she is not working to support her broken family. Without Charley’s full protection, Judy Brewster would have been light work for Jerry Dandridge.

Toni Collette’s Ms. Brewster, however, has the womanly strength that any single mom would admire (and a great behind to go along with it). Collette’s mama bear portrayal reasserts that strong women are pivotal to the strength of a film. Judy is no 1991 Sarah Connor, but she proved that she’ll be ready should the undead come around again.

The unanimity with which 2011 Fright Night‘s performances outmatch that of 1985’s does not account for the original’s merit as a classic. Rather, the improvements made upon the story, which honor the intelligence of the audience by re-envisioning the expected, show that a remake isn’t inherently a bad thing when done with respect.

And no…that does NOT mean I will see the new Footloose with you.