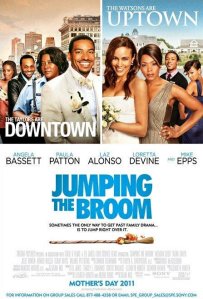 The marginalization of minorities in mainstream entertainment is evident in Hollywood more than any other space. And no one is more critical of Black Hollywood than black people (often for good reason).

So when previews of Salim Akil‘s film Jumping the Broom went public, cynical moviegoers considered it a replica of all black comedies based around weddings and or funerals. Such an assessment is not inaccurate, but dismissing the effort outright is a harsh stance to take, especially considering how difficult it is to have black-starred films greenlit for theatrical release.

What disaffected movie lovers should remember is that Hollywood thrives on repetition, regardless of actors’ races. Sports movies sell. Action movies sell (how else would The Fast and the Furious become a five-film franchise?). And, apparently, movies about black people getting married sell. And more power to them for doing so.

Jumping the Broom may be a replica of a trope frequently used in commercial films today, but credit should go to its producers for assembling such an undeniably talented cast to execute it. With veterans Loretta Devine and Angela Bassett as the at-odds matriarchs, the core of this film is already an upgrade from any that came before it. And adding comedians Mike Epps and DeRay Davis to the cast demonstrates that Akil has a sense of how to balance outrageous humor with the humor that naturally comes out of situations like in-laws meeting each other for the first time, since Devine and Bassett’s interplay will definitely get its own laughs.

Every time we go to the movies, we see something we’ve seen before. But the reason we keep going back is because of the small variations that make the experience just different enough to be interesting. So, yeah, wedding movies have been done. But screenwriters Arlene Gibbs and Elizabeth Hunter, as well as pretty faces Meagan Good, Laz Alonso and Paula Patton, will hopefully make the experience different enough to set it apart from the other titles that will be on the ‘Other Suggested Titles’ list next to it on Netflix or Amazon.

Even though I will wait for this movie to go to video before I watch it, I urge people who want to see it now NOT to buy an illegal copy of it. The lost revenue that comes from bootlegging will only deter the industry from bankrolling movies with black casts because it will be more difficult to justify it as a sound business decision. So as bad as the economy may be, and how much more expensive it is to go to the movies, imagine being broke AND complaining that you don’t feel represented in movies anymore. We have been there before; why return to those times in exchange for a discount?