The much anticipated DVD release of the fifth and final season of Friday Night Lights has given viewers a chance to bid farewell to Dillon, Texas. And its concurrent broadcast on NBC has given curious TV watchers a chance to see what all the praise has been about for the past several years. Friday Night Lights explores how people learn to triumph in spite of emotional frailty. And juxtaposing that theme with Texas high school football culture is what makes the storytelling so apt and powerful.

The heart and soul of the series are Coach Eric Taylor (Kyle Chandler) and his wife Tammy (Connie Britton). Their concerns about parenting and their careers fuel their dynamic, creating a core that puts all of the supporting plot lines into perspective. Still, the show completely draws the audience into the lives of the teenage characters, whose everyday goings on actually have emotional stakes worth respecting.

With the exception of a hiccup brought on by the writers’ strike during the second season, Friday Night Lights consistently delivered strong story arcs for its five years on the air. And the programming shifts from NBC to DirecTV’s channel 101 and back to NBC deterred neither loyal fans nor the show’s producers, who had every right to have a chip on their collective shoulder after their home network showed little faith in the critically acclaimed series. 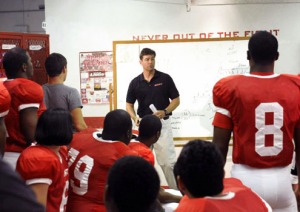 The widespread popularity of Friday Night Lights is only a surprise to people who’ve never seen the show. But dismissal of the series as ‘that football show based on that football movie’ ends the moment doubters watch one episode. As an American backdrop for drama, sports are a can’t-lose device. And in the case of Friday Night Lights, football is a backdrop that can win over any anti-sports TV watcher.

Unlike other sports shows and movies that closely link winning and losing to the moral development of characters, Friday Night Lights exhibits unparalleled depth. The writing makes audiences listen to every word, the cinematography makes viewers not want to blink, and the musical score turns every episode from a great drama to a work of art.

So if you’re tired of predictable network dramas that offer nothing new or engaging, Friday Night Lights can restore your faith in TV. Sadly, the show will broadcast its finale this year, leaving a significant void in NBC’s lineup. But, on the bright side, at least it got a chance to run the course it deserved.