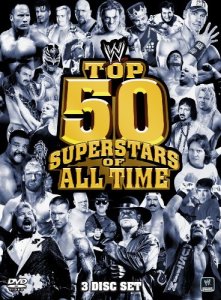 The list of the 50 all-time greatest WWE Superstars has diehard wrestling fans up in arms about the mysterious criteria by which the honorees were selected.

While the company stretched their definition of WWE Superstar to include wrestlers whose fame precedes Vince McMahon’s command of sports entertainment, several performers upon whose backs McMahon built his empire were snubbed or placed far lower than any purist would put them. Conversely, some WWE darlings have been ranked higher than expected.

Such subjectivity about where professional athletes rank among their peers is nothing new. In The Book of Basketball, author Bill Simmons suggests that the Basketball Hall of Fame adopt a pyramid structure that takes into account the overall performance and impact its honorees have had in the sport.

In an effort to provide a more objective (and truer to form) alternative to the WWE’s top-50 list, Marz Daily Media will hereby construct the WWE Superstars Pyramid. This selection of professional wrestling’s most memorable and influential gladiators will take into account different aspects that make real Superstars.

To more accurately honor its qualifier (WWE), the list will only include performers starting from 1985 that worked for either WWF/WWE or WCW, which WWE bought out in 2002. References to the WWF in this article are to intentionally contextualize the period being discussed.

This 5-part edition of Thursday’s Top will start off with the first level of WWE Superstars. The base of the WWE Superstars Pyramid should be exciting. So this group of 10 Superstars will be the reason a visitor will be excited to see who is honored in the upper levels.

Not to be mistaken as the least important of the top 50, these guys are the epitome of what sports entertainment was poised to become, the guys who have taken ego to another level, making every storyline compelling. So to get this epic conversation going, Marz Daily Media presents… 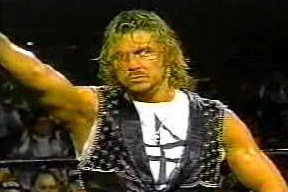 While he’s probably the most controversial choice on any all-time-greats list, Brian Pillman became the most volatile (and intruging) personality during a period when the ‘Monday Night Wars’ were in full swing. He came by his “Loose Cannon” moniker honestly, as he went through a drastic character change from World Championship Wrestling (WCW) to Extreme Championship Wrestling (ECW). Vince McMahon got wind of Pillman’s newfound popularity and hired Pillman to help the WWF compete with WCW.

Despite his short tenure in the WWF (1996-97), the “Pillman’s got a gun” angle with “Stone Cold” Steve Austin, as well as Pillman’s alliance with the anti-American Hart Foundation, made Pillman an irreplaceable factor during that time, the catalyst that brought instant heat to even the most standard of storylines.

The most impressive part of Pillman’s infamy is that Pillman was never really in shape to wrestle an actual match during this period. The surgically repaired ankle he suffered from a car crash in ’96 severely limited his ability to wrestle. So all of the attention that Pillman got was based on his reputation and his ability to cut promos that veered on the side of shoots.

People are right to call Pillman the Kurt Cobain of professional wrestling. His identification with disaffected wrestling fans in serious need of a shake-up briefly made him the voice of a generation. And his death in 1997 goes down as one of those ‘where were you when?’ topics of conversation to this very day. 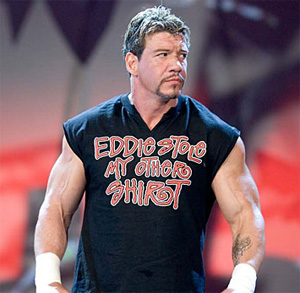 In the mid ‘90s, Eddie Guerrero built a reputation for being one of the best workers in the business. As a veteran of Mexican wrestling, Guerrero became the backbone of the cruiserweight movement that focused on smaller, more high-flying performers.

What makes Eddie Guerrero a shoe-in for the rock star tier of the WWE pyramid, however, was his ability to captivate audiences as much outside of the ring as in it. The ‘Latino Heat’ persona that Guerrero picked up made him the guy everyone loved and loved to hate. At the same time, the sense of humor and bravado that he brought to performances demanded respect no matter who he faced.

Another wrestler who died too soon, Guerrero’s legacy with the WWE has unfortunately faded over the years. The only evidence that Guerrero made an imprint on the company is the few unsuccessful attempts to replicate his uber-vain Latino character with guys whose work rates pale in comparison…and his wife Vicky, who has emerged as one of the most hated characters of the all time. Having her as onscreen talent will never cease to make fans uncomfortable, especially the ones that loved Eddie. Hopefully Eddie’s place in this pantheon of wrestlers will do a better job with his legacy than the WWE has. 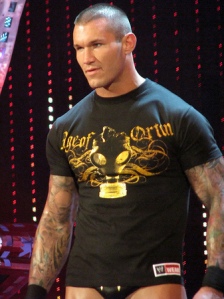 With a pro wrestling pedigree going back three generations, Randy Orton has achieved stardom beyond the wildest dreams of his father and grandfather. As the youngest-ever WWE champion, Randy Orton established himself as a real player in sports entertainment well ahead of his predecessors’ pace.

But the truly distinguishing factor in this Orton’s success has been in his evolution from a kid with a great look, and a fair to middling work rate, into a multi-dimensional in-ring performer who captivates audiences whether he’s doling out punishment, stalking an opponent or brooding in a corner. If there is any current WWE superstar who has mastered the wrestling version of a cæsura, it’s Randy Orton.

At this rate, it’s only a matter of time before Randy Orton is completely carrying the WWE, which would place him on the ultimate pyramid tier (the final installment of this series of posts). For now, the pyramid benefits from being greeted by WWE’s most talented rising star. 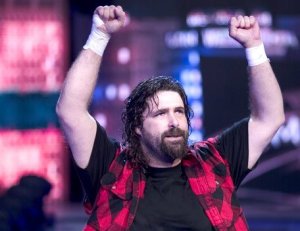 Sometimes hard work will take you places that your talent never will. That statement is truer in the case of Mick Foley than it is for anyone else. Foley came a long way from his hardcore beginnings as Cactus Jack to a main event headliner in WWE’s biggest shows.

In channeling Cactus Jack, Mankind, Dude Love and plain ol’ Mick, Foley used his character versatility, homespun charisma, and the will to put his body through unspeakable punishment to become the greatest everyman the WWE has ever produced.

Perhaps he wouldn’t be a part of this collection of wrestlers if he wasn’t so good at getting the crowd to go crazy at the mention of the city they’re from. Coming from other performers, it’s considered a cheap pop. But from Foley, it’s a sincere ‘thank you’ to the people who made a pipe dream come true. 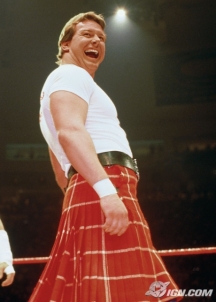 If you’ve ever seen a lame talk-show-themed segment on Raw or Smackdown, you have “Rowdy” Roddy Piper to blame. Piper’s Pit was one of the most entertaining segments on ‘WWF Superstars’ in the ‘80s. No wrestling personality (with one exception, to be profiled later) has since had the quick wit to compare to Piper’s work on the microphone.

In the ring, Piper displayed a magnetic toughness that reminded wrestling fans of the psychology that goes into the narrative of a wrestling match. And Piper used his charisma to cross over where only few others before him succeeded at the time, racking up more motion picture credits than any other professional wrestler of his era.

Today, it’s not uncommon to see WWE superstars on the big screen. But in the ‘80s and early ‘90s, Piper and Hulk Hogan were the only wrestlers to make the transition with any consistency.

Roddy Piper’s also the only person for whom a crowd of Americans would go wild at the sound of bagpipes. Why is this interesting? He’s actually Canadian. 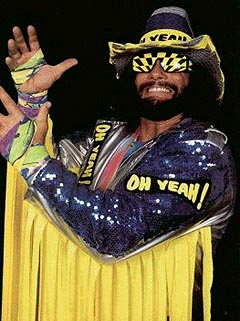 Out-of-this-world intensity wrapped in a psychadelic wardrobe; what isn’t rock star about “Macho Man” Randy Savage? The pageantry that came with Savage’s persona rivals that of all of entertainment’s most vain figures. But his in-ring performances quickly backed up the ego Savage emanated.

As the perennial second fiddle to Hulk Hogan in the WWF hierarchy, Savage successfully carved an irreplaceable niche for himself with his cocky but barely intelligible promos, glittering costumes, and agility rarely exhibited by men his size.

And if crossover appeal is what you’re after, remember that “Macho Man” Randy Savage put Slim Jims on the map. 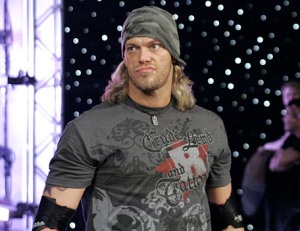 In professional wrestling, adaptability can mean just as much for longevity as staying healthy. And although Edge’s in-ring career recently came to a close for physical reasons, he has left behind a legacy that will exemplify how talent stays relevant in the WWE.

From his start as the patent-leather-trench-coat-wearing enigma, to the faux-vampire, to one half of a goofball duo, to the Rated R Superstar, Edge recognized that no matter what gimmick he had, his talent and showmanship would establish him as a WWE mainstay for several years.

Rock stars that change up their sound to keep up with the times usually have storied careers that people admire long after the music stops. This admiration is already true in the case of Adam “Edge” Copeland. 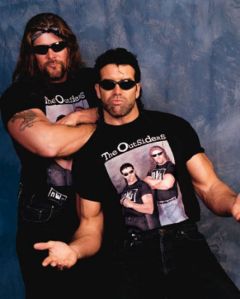 As individuals, Kevin Nash and Scott Hall had respectable careers as agile big men in a time when smaller performers were on the rise. But as a unit, Hall & Nash pioneered the most interesting industry plot in the history of professional wrestling.

After leaving the WWF, Hall & Nash launched an angle with WCW—essentially assuming much of WWF identities—in which they staged a “takeover” of the company, which blew up into the New World Order. Since not many people knew that Hall and Nash had left WWF at the time of this ‘coup,’ it was the most exciting time for fans that knew that the angle was a huge work, but wanted to believe it was true.

The power move that Hall and Nash (along with Hulk Hogan) made to get WCW on top in the Monday Night Wars for over a year will go down in history as the greatest saga in the history of the industry (including McMahon’s eventual buyout of WCW in 2002).

And considering that Hall and Nash’s in-ring performances in WCW had little to do with the success of the angle, it’s clear that their personalities are what brought them to the top in much the same way that aging rock stars continue to pack arenas. 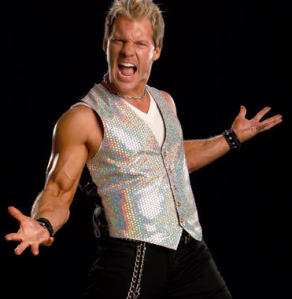 Perhaps Chris Jericho planned his Bon Jovi-esque haircut as grooming for the top spot of this tier of the WWE pyramid.

Landing his first big break with WCW, “Lionheart” Chris Jericho took wrestling by storm with a tenacious work ethic, impeccable technique and a style of his very own. Jericho kept Monday Nitro interesting with the successful Monday Night Jericho segment (the generational equivalent to Piper’s Pit). He joined the WWF with a bang in 1999 with his Y2J campaign and never looked back.

A champion at every level, Chris Jericho has been a fan favorite as well as one of the most hated performers in the business. The effect that Jericho has on wrestling fans is only possible with an electrifying mix of talent and charisma. And Jericho’s ability to branch out into other media—training at The Groundlings and commenting on pop culture on VH1—demonstrates that he has what it takes to be the kind of transcendent figure that many professional wrestlers aspire to be, but rarely ever become.