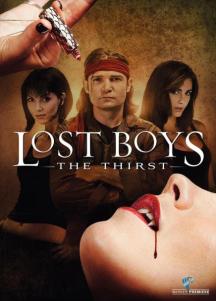 You know those opening movie scenes that reek of ridiculous and make you say, “They can’t be for real.” And then when the scene builds to an unbelievable level of absurd, you hear someone yell, “Aaaand CUT!” revealing the movie-within-a-movie setup that has long worn out its novelty.

When watching Lost Boys: The Thirst, you may experience that feeling for its entire 81-minute runtime. The Thirst, the second sequel to the 80s vampire classic, demonstrates, in textbook fashion, how difficult it is to recreate the magic of an original piece. But, to its credit, the attempt puts Lost Boys: The Tribe (sequel #1) to shame and offers the kind of straight-to-video entertainment that you welcome from a washed-up actor whose last TV appearance was on an A&E reality show.

Despite The Thirst being a bad movie, it remains watchable for fans of the original because it uses nostalgia to power the narrative. Ignoring The Tribe, audiences see in The Thirst a chance to revisit the Frog brothers, whose lives have hit the skids in eerie comparison to the actors who first brought them to life 23 years ago (Corey Feldman and Jamison Newlander). Director Dario Piana seized the opportunity to create a parallel rarely seen in Hollywood: actors who look like s___ playing characters that are supposed to look like s___.

Petty digs aside, the movie does its due diligence to connect itself to the original film in ways that The Tribe never did. For instance, fans get a quick recap of what has happened to the more memorable characters from The Lost Boys (spoiler alert: David and Max are still dead). Establishing this connection, even in passing, legitimizes writers Evan Charnov and Hans Rodionoff (yes, this opus needed TWO writers) as fans of The Lost Boys who wanted nothing more than to honor the original story, respect the intelligence of fellow vampire diehards…and put their own grubby little stamp on the title.

For fans who missed or were thoroughly disappointed by Lost Boys: The Tribe, but have a morbid curiosity for how Edgar and Alan Frog might live on in a way that more accurately reflects their memory of them, Lost Boys: The Thirst is not the worst hour and twenty-one minutes you’ll spend with Corey Feldman. If you watched three episodes of The Two Coreys, you’ve already done that.