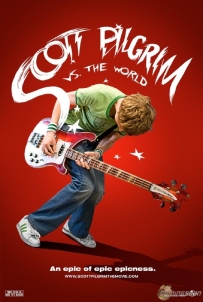 geek (ɡiːk) — n 1. a person who is preoccupied with or very knowledgeable about computing

Thanks to our evolving vernacular, everyone qualifies as a geek about some subject or another. Basketball? Zombies? Movie-chain name games? Guilty as charged. So when a friend shares their geekdom with me, I respectfully make a visit.

Such was the case with Scott Pilgrim vs The World. Rachel, my fellow zombie geek, strongly recommended the live-action adaptation of the popular comic book, which I’ve never read. And after lending me the title on blu-ray, I had to give it a shot (after all, everything’s better in HD).

Scott Pilgrim (Michael Cera) is a 22-year-old self-made loser in a mediocre band and forges a relationship with Ramona (Mary Elizabeth Winstead), the literal girl of his dreams. Soon into their affair, Scott learns that he must defeat Ramona’s ex-boyfriends (and girlfriend) in battle before he can claim her love as his very own.

As for these battles, they espouse all of the features expected of video game enthusiasts, complete with the defeat of enemies resulting in a downpour of coins (didn’t think I’d see that happen anymore). Also, the displays of superhuman strength and recovery from unreal punishment definitely satisfy the comic book nerds who had doubts about the live-action conversion.

Still, for someone who does not share these geek proclivities, the disbelief that director Edgar Wright asks that lay viewers suspend feels extreme. Although characters give some pause when witnessing the fantastical fight sequences, their overall nonchalance is more confusing than inviting.

Even setting aside my difficulty identifying with the two-dimensional, hipster-friendly characters, the world that Wright illustrates lacks the necessary grounding for someone experiencing the Scott Pilgrim universe for the first time. My viewing experience elicited an alternation of “What the f___?”’s and “Who the hell cares?”’s.

On a high note, the two hours was not without its funny moments. Even for a viewer who’s grown tired of Cera, America’s favorite awkward hipster dude, the supporting cast did a fantastic job of reminding Scott that, even in this outrageous world of real-life Nintendo-style fights, he’s a loser with nothing going for him. Kieran Culkin (you know, Fuller the bed-wetter) plays Wallace, Scott’s roommate, whose sharp wit is always a step ahead of Scott’s bumbling struggle for self-respect. Comedienne Aubrey Plaza steals her scenes with her trademark dry bite (she’d be ahead of her time in any other period of film to date).

But my personal favorite co-star would have to be Alison Pine, who plays Kim, the drummer in Sex Bob-omb, Scott Pilgrim’s band. While my aversion to hipsterism is quite strong, something about cute, falsely disaffected, freckle-covered redheads really puts quarters in my Time Crisis 4.

So, in summation, Scott Pilgrim vs The World was not for me, but I can understand why it would be quite the good time for other people, just as I wouldn’t begrudge some women their love of Sex & The City when I’m a fan of HBO’s Entourage. If there’s one lesson I relearned by watching Scott Pilgrim, it’s that it really does take all kinds (except for fans of Jersey Shore, the E! Channel, or Twilight, who cannot be trusted with their own opinions).