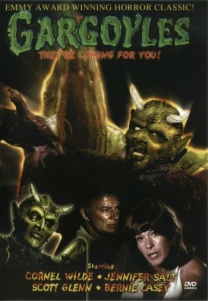 1972, that’s when. Sorry to get your hopes up about what you may have thought was a live-action adaptation of the popular 1990s animated series. But I think you’ll appreciate the action movie that did have the same title.

On the way to Los Angeles, a paleontologist and his daughter stop in the desert to visit a man who claims to have found something interesting. The professor becomes skeptical when the man presents a skeleton of what he says is a gargoyle. But a chain of events confirms that the desert is crawling with these creatures and they are only interested in killing.

The professor, his daughter, the local sheriff and some dirt riders join forces to do away with these gargoyles before they can reproduce and take over the world, which is the gargoyles destiny as servants of Lucifer.

I’m not kidding. This is the story.

Although this movie is not great by any stretch, I cannot completely write it off as a waste of time. For instance, a low-budget movie like Gargoyles is always bound to have special effects limitations. So for the sake of a good time, it’s best to appreciate what director Bill Norton managed to do with such a hurdle. In this case, most of the gargoyle action is cheesy and fun (Norton used slow-mo to heighten the horror of his monsters, making it funnier).

Perhaps humor wasn’t Norton’s aim, but with a made-for-TV movie, filmmakers probably take what they can get. It’s just a job.

But what of the bright spots, you may wonder. Scott Glenn fans would be pleased to see him in one of his early roles as a young daring dirt bike rider. A movie with a bigger budget definitely would have drawn his character out as the love interest of the paleontologist’s daughter. The chemistry was there, even when the bars of a jail cell separated them (don’t ask).

Also, Bernie Casey plays the king gargoyle. If you don’t know who Bernie Casey is, then that means you probably haven’t seen comedy classics Revenge Of The Nerds or I’m Gonna Git You, Sucka. For some strange reason, Norton decided not to use Casey’s voice and synthesized it within an inch of its life. Still, it was nice to know that Bernie Casey was getting roles that did not necessarily call for him being ‘the black guy,’ even back in 1972.

Another enjoyable part of Gargoyles was Diana (Jennifer Salt), the paleontologist’s daughter. Put mildly, she’s super cute. Despite her horrible bad dialogue, it’s clear that she had a bright future in the business.

Then I looked her up to find out what she’d been doing lately. It turns out that she wrote the screenplay for Eat Pray Love. Deal breaker. I don’t think I can look at her the same way again. But that’s okay. I probably won’t watch Gargoyles again anyway.

So yeah, if you have 72 minutes (!) to watch men in green suits chase some people around the desert, Gargoyles could be the choice for you.

Forgive how unfunny this review is, but I’ve saved the funniest part for last…

This movie won an Emmy.