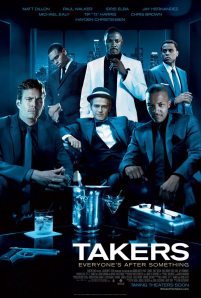 So take Stringer Bell and put him in a movie with 1) a guy who’s in career prison for life for beating up his girlfriend, 2) a guy who just got out of real prison for, ironically, loving freedom a bit too much, 3) two pretty dudes who can’t carry their own movies and 4) the guy whom everyone has seen but usually can’t remember where.

Takers is the apparent future of action movies. In the casting world, it’s all about proven music stars joining forces with teen idols who couldn’t act their way out of a parking ticket if the cop was a fat woman and they were made of candy.

But who knows? This one may be fun. It’s always nice when Idris Elba gets to play a Brit since he really is one. And movies can do worse than having a gunfight or three.

But for anyone still aglow over The Expendables, the best way to watch Takers is probably to try and forget that you already saw the best action movie of the summer.

Hell, you’ll have to figure something out: your girlfriend actually wants to see this one.