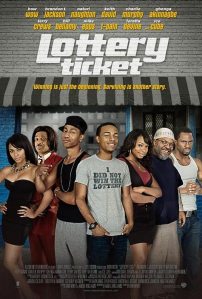 Lottery Ticket looks like another one of the many movies that will get some negative press by black public figures whose mission it is to be critical of all things that do not uplift the black community. Honestly, I tend to have a fairly laid back attitude when it comes questionable representations of black life in the media (I thought Norbit was hilarious).

But this time, the potential discomfort is too great to ignore. As much as I agree that black Americans often set the tone for how our society views issues that impact all Americans (often through comedy), Lottery Ticket demands that the black community take on an issue that just makes me nervous. Considering the history of black Americans (and the mainstream view whomof), American greed is not something that I can appreciate black people personifying, much less at the exclusive expense of other black people.

Lottery Ticket is the story of Kevin Carson (Bow Wow), a young lottery winner, who must endure a weekend of harassment by family, friends and acquaintances before he can collect his winnings. It sounds like a benign premise for an absurd comedy, but I just don’t believe that black people are the right conduit through which a story like this should flow.

You know what? I’m beginning to channel my inner Spike Lee (which I didn’t want to do), so I’ll end this post by saying I don’t have a good feeling about this one. I don’t doubt that it has the potential to be funny (with a cast including Mike Epps and Charlie Murphy, among others). But the theme of greed is just a dangerous one for black people to be associated with comically, because it can too easily be interpreted as savagery, a common trait attributed to black people by the perpetually ignorant.

Trust me when I say that I want to be wrong about this. I really really do.

Below is the trailer, for your consideration. Enjoy your weekend.