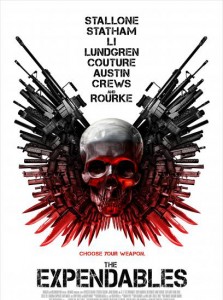 The last time I did a quick turnaround review from a Friday Trailer post wound up being a disappointment. Thankfully, Sylvester Stallone restored my faith in such a practice.

My cousin* and I joined hundreds of other eager moviegoers Friday night to watch a movie that we’d been fantasizing about for over 20 years. What followed was the realization of years of talking about how cool it would be if all the action stars we liked were all in the same movie.

Of course, some of the big names have changed. But apparently, Stallone (as director and co-writer of the screenplay) kept the spirit of that idea alive for millions of 80s kids. The Expendables has everything that makes a solid action movie: explosions, top-notch combat choreography and comic relief. Add proven star power to the mix, and you’ve got a can’t-miss movie that makes Iron Man 2 look like Toy Story 3.

Instead of going into detail about why you should see The Expendables, thus spoiling your viewing experience, I ask that you trust me when I say that it’s an action movie well worth seeing.

What I will do is share some non-spoiler observations about the best action movie I’ve seen in years.

The torch has been passed to Jason Statham

Instead of placing the success of this movie on the backs of aging stars, Stallone called in a guy from the next generation of ass kickers to keep everyone honest. Jason Statham (The Transporter series, Ghosts of Mars) has been putting work in for several years on both sides of the Atlantic.

After noticing a dearth of bonafide action heroes, it’s clear that Jason Statham is cut from the same cloth of tough guys with which the American action genre once teemed. And although his record isn’t spotless, we can’t hold Crank against him without mentioning three times as many stinkers that Stallone’s done, right?

My guess is that we’ll be seeing Mr. Statham a lot more in the coming years. It’s nice to know that the action genre is in good hands, even if those hands are British.

I will not watch The Green Hornet

So I’m sitting there enduring the trailers, when I see an interesting 2011 twist getting put on the short-lived 1960s series, The Green Hornet, now starring Seth Rogen and Jay Chou. I’m not a diehard Seth Rogen fan, but I respect him as a comedy star and seriously considered checking this one out.

And just as I’m thinking that this movie could be worth the eventual add to my Netflix queue, it happens: one of my movie deal breakers hit the screen. Thank you, Cameron Diaz. Thank you for completely ruining a benign pseudo-remake of a long dead project. To say that I was vocally and physically demonstrative in my disapproval of Ms. Diaz’s casting in this movie would be more of an understatement than “that Jetblue flight attendant had an unusual day.”

African terrorists in movies are hilarious

There really isn’t much more to say on this one. When Africans get angry and have to get their point across in English (as opposed to their native languages) comedy gold flows like so much lava at Pompeii. I’m willing to bet Americans sound just as foolish butchering other languages in anger, too.

Thank you, David Callaham and Sylvester Stallone, for adding irate Somalians to this wondrous action stew.

A Latino CAN have a crappy Latino accent

In The Expendables, David Zayas (Oz, Dexter) plays a five-star general of an underdeveloped island. What is jarring about Zayas’s performance is that his accent seems pretty underdeveloped, too.

Zayas’s roles usually call for an Americanized Latino, but the expectation for the General Garza role should have been different. Zayas didn’t seem to turn off his Bronx-cultivated Boricua accent that he always has. To put it lightly, he’s just not very convincing as the military leader of a poor island.

I know it’s risky to say that a Latino doesn’t sound Latino enough, so I apologize if I’ve offended anyone by being caught off guard based on the years of real-life experience I’ve had with Latinos. I just thought I’d warn anyone who has an itch for calling out inconsistencies in a movie where substance never pretended to be its strength in the first place.

The above statement is at least true as far as the majority of the theater on Friday night. We sat through the trailer for Jackass 3-D and listened to the crowd howl as grown men put themselves through unpleasant feats of idiocy for their own amusement.

Of course, there was a time when I was somewhat fascinated by Johnny Knoxville, Steve-O and co.’s motivation behind choosing this as their marketable skill, not to mention how large a market for this kind of entertainment was. I was in high school then, I think. Most of the people in the theater, on the other hand, were definitely older than that, which tells me that Jackass has been an ongoing source of entertainment for those people. All I could do was shake my head and say, “Really??”

Over the past decade, mixed martial arts (formerly understood as no-holds-barred cage fighting) has emerged as a form of organized combat with its own pool of marketable personalities. It was only a matter of time before these talents were tapped for their physical presence and prowess on the big screen.

UFC hall of famer Randy “The Natural” Couture had nine movie/television credits to his name before The Expendables, demonstrating his ability to perform even when the stakes are artificial. The Expendables also featured bit roles for identical-twin Brazilian MMA stars Antonio “Little Nog” and Antonio “Minotauro” Nogueira (who defeated Couture just last year). So it appears that Hollywood may be requesting the services of MMA fighters more often from now on when a role call for some muscle.

Other MMA fighters have also appeared in high profile movies, most notably Quentin “Rampage” Jackson in the recent A-Team revisit. It looks like the former NFL star will have to broker a little harder for those action roles that they’d booked routinely since the 1960s.

There was no place for Jean-Claude Van Damme anyway

With the assemblage of talent in The Expendables, the natural reaction for many fans was to wonder why Van Damme wasn’t involved. Well, if you don’t already know, the report is that Stallone personally offered him a role, but he turned it down because there was no substance to his character…seriously.

All told, I’m not sure I can blame him. After making a movie like JCVD, the semi-autobiographical feature about him being caught up in a heist situation as he deals with child custody issues and his inability to find work, a little bit of ego is to be expected.

Still, after watching the movie, it’s clear that they moved on without him to successful results. Besides, his skill set would have been redundant with Jet Li in the film. And with no chance of him being able to sit in front of the camera for ten consecutive minutes to talk about what he’s been through in his life (see JCVD), I think audiences everywhere (expect for maybe Brussels) can live with his absence.

Before you consider the above statement trite, consider this: “the Texas Rattlesnake” spent his most famous years with the World Wrestling Federation (now the unfortunate WWE), where size and muscles rule. On the size spectrum of pro wrestlers, Steve Austin would be considered middle-of-the-road at 6’2” and 250 lbs. So it’s easy to have a skewed view of what those stats mean among us mere mortals, when you don’t see them in the flesh.

It is duly easy to forget that Sylvester Stallone, the biggest action icon in the history of American cinema, stands at a shrinking 5’9½”  (if you even believe that). So seeing Austin and Stallone in the same frame in this movie created an avalanche of perspective as it relates to two guys who’ve made a living pretending to beat the hell out of people.

So, FYI, Steve Austin is a large man whose path you would not want to cross without permission, “and that’s the bottom line!”

Gary Daniels can still get the job done

That’s okay. Unless you were a fan of competitive kickboxing or martial arts-based B-movies in the 90s, you’d have absolutely no idea who Gary Daniels is. For those who don’t know, Gary Daniels is a British kickboxing champion who broke into acting by performing in martial arts-based B-movies in the 90s, most notably the live-action version of Fist of the North Star, opposite Costas Mandylor and the late Chris Penn.

At 47 years old, it looks like Daniels still has some petrol in his tank to duke it out with anyone who opposes him in The Expendables. So instead of wondering who the hell this British guy with the goatee is, rest assured that this isn’t his first go ‘round.

They’re probably his most unusual feature. And yes, I’ve seen him lately.

*I actually went to the movies with two of my cousins, but the younger one is of a generation that doesn’t fully understand the importance that movies like this had for kids just one generation before. Young people today, I tell ya…