Video games: a cornerstone of interactive entertainment for decades (just ask these kids)

The marriage of virtual reality and guns, commonly known as the ‘first-person shooter,’ has made up a large part of gaming’s multi-billion-dollar industry (to no one’s surprise). Still, there have been relatively few shooters over years that I’ve considered truly special.

Okay, so I have a confession to make. Most first-person shooters (where your character’s point of view virtualizes the user’s) give me motion sickness, so I don’t play them much. Something about having to control player movement AND shooting is just too much for my brain-stomach relationship. But to prove to you that I’ve tried to fight this problem over the years, here is a list of first-person shooters that I have actually played, only to result in regrettably unbearable nausea:

Not a long list, but the ten-year span of titles should at least suggest a familiarity with the genre that would validate this week’s Thursday’s Top. Fortunately, there have been some first-person shooters that have not made me sick. An added bonus for me was the realization that my three Favorite First-Person Shooters were released, and enjoyed, in different decades, giving each a distinction of which gaming fans all over would approve. 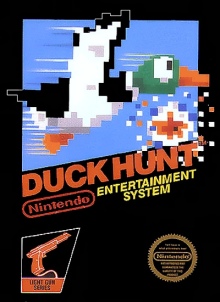 Usually coupled with Super Mario Bros. on one cartridge, Duck Hunt brought light gun technology into living rooms worldwide on the NES. The challenge was to shoot pairs of ducks out of the sky to advance through rounds of increasing difficulty. And to make the hunting environment of that game complete, a canine companion would joyfully collect your shot-ridden targets. Conversely, your dog would also mock you with laughter when your attempts were unsuccessful. So, in short, Duck Hunt taught me about fickle bitches.

Although I wasn’t especially skilled at this game, the fun factor remained high because, at the time, the novelty of gadgets took more time to wear off. Such was the case with the NES light gun. Not everyone had one. So if you had access to one, you’d use the hell out of it just to stay ahead of the coolness curve. And since there were no other light gun-compatible games (to my knowledge) on the NES, Duck Hunt was the perennial conduit for that coolness. 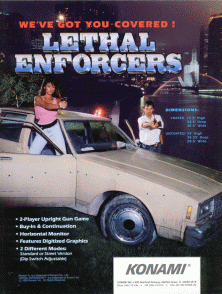 With the 1990s came the 16-bit game revolution. The change, as evidenced in the differences among Nintendo platforms (NES à Super NES) and Sega platforms (Sega Master System à Sega Genesis), opened my eyes to the potential that video games had for incorporating lifelike environments with intuitive gameplay. Lethal Enforcers took first-person shooters to a more high-stakes level than Duck Hunt. As an elite police officer named Don Marshall, your goal was to rid the city of a gang of criminals who had taken over the city. 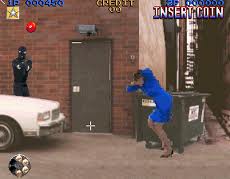 The game element that set Lethal Enforcers apart (aside from the bloodshed) was the selective targeting technology, with which you were rewarded or penalized based on the people you shot in the game. For instance, shooting hostages when you were trying to shoot highjackers would result in a reduction in your own health. This feature demanded better aim, already challenged by the harried pace of the action, because accidentally shooting pixilated old ladies felt really bad. They just looked so real!

Imagine being a 10-year-old boy. You’ve come to the arcade to spend your hard-earned allowance on the new gun game. But when you get to the shiny new machine, you see two big kids playing it. The guys look old enough to think girls aren’t gross. You watch them finish level after level, waiting for the moment that you can use what you’ve seen so far to help you when it’s your turn.

You watch some more. 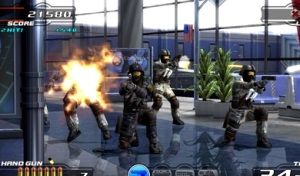 Then you see that they both only have one man left. You get happy on the inside because you want to be glorious. And it happens. The big ‘GAME OVER’ covers the screen, and you step forward. But as you get closer to the machine, and the ‘CONTINUE’ counts down, you see a stack of quarters that’s worth three of your allowances in front of each of the guys. You get sad because you know that they will not leave the machine until they’re good and ready, which may be never.

They look back at you and grin, knowing that your summer wish has been ruined. You can tell that they don’t care. Then you wish that Santa doesn’t bring them anything come Christmas, but you know it doesn’t make any sense because they probably think he’s fake.

Now eff that kid. To hell with him. He should get a job before he even dares play with big boy stuff like Time Crisis 4.

As the latest installment to the Namco series, Time Crisis 4 is simply an update to the already incredible games that came before it. I don’t know the names of the protagonists. I don’t even remember whom they work for. I just know that there are some bad guys and some bugs and some gunships, and when you shoot at them, good things happen.

The single-camera animation allows you to move through different game areas while standing still. It’s like being inside the body of an avatar who’s more aware of the surroundings than you are, which strikes a great balance between player control and the game environment.

But my favorite part of this game is the simulated recoil on the gun when shots are fired. And the recoil effect changes to simulate the difference in weapon type, making you one with the machine.

So if you’re in an arcade this summer, and you’ve got your best friend with you, spend a ten-jamin on some good ol’ ‘Merikin shoot-em-up and show the kids that grown-ups run the arcade. Besides, shouldn’t kids be off reading somewhere? Sheesh.