This July 22nd marks the day when pro wrestler/sports entertainer Shawn Michaels turns 45. Although he became a superstar as a singles competitor, older wrestling fans remember that he got his big break in the (then) WWF as half of a tag team called The Rockers. Their memory got me thinking about all of the tag teams that I’ve enjoyed watching over the years, so in honor of Michaels and all the other tights-clad musclemen who pretended to beat each other up for my amusement, this Thursday’s Top is dedicated to my Favorite Tag Teams of All Time.

Shawn Michaels and Marty Jannetty brought a high-flying style to the WWF that changed tag team wrestling forever. They were young, girls liked them and they revitalized a show whose stock-in-trade was typically brute strength. With their speed, nerve and tandem work, The Rockers paved the way for teams like The Hardys and Edge and Christian (tag team legends in their own right).

As a child, I didn’t realize how much fun the character/gimmicks really were. Effectively, Demolition was professional wrestling’s S&M tag team. Wearing “master” garb was their tongue-in-cheek aesthetic (a lot like Brutus “The Barber” Beefcake hailing from San Francisco), but it didn’t stop Ax and Smash from punishing all opponents with a relentless, smashmouth style.

In 1990, Demolition added a member, Krush (Brian Adams), allowing them to enact the “Freebird Rule,” made famous by the Fabulous Freebirds (ca. 1980). No matter whether they were heels or babyfaces, it was difficult to dislike this team because they always meant business and had to be respected. They also had one of the most devastating tandem finishers in the history of professional wrestling. 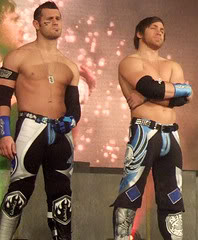 TNA may be less popular than World Wrestling Entertainment (WWE), but one thing the WWE does not have is a premium on in-ring talent. There is no truer example for this show of equality than The Motor City Machine Guns. Alex Shelley and Chris Saban use rapid-fire, seamless teamwork that has set the bar extremely high for tag teams that come after them. Shelley and Saban are another example of how their face/heel status never really matters because they always show up to get the job done, and it’s always fun to watch.

Any man would have to be tough to wear hot pink tights, right? How about two? The Hart Foundation was one of the first power/speed tandems to dominate professional wrestling in the 80s (on par with The British Bulldogs). Bret Hart, also nicknamed “Excellence of Execution,” brought technical savvy to the group, while “The Anvil” threw opponents around (and did a lot of maniacal laughing). They remained popular thru their split in 1991, regardless of whether they were good guys or bad guys. Bret Hart went on to become one of the WWF’s greatest singles champions, but his tag team career is just as noteworthy. 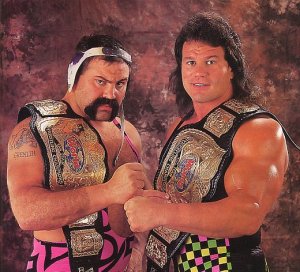 One Saturday morning in 1989, I watched Scott Steiner throw another guy to the ropes. When they guy came back, Scott jumped up, wrapped his legs around the guy’s neck and did a back flip, driving the guy’s head into the mat. Needless to say, that finished the match. But this memory lasts because it was the first time that I ever saw what would later be called the hurricanrana. At the time, it was the Frankensteiner (brilliant!).

Rick and Scott took their collegiate wrestling pedigree to the squared circle with history-making results. They steinerlined and frankensteined their way to becoming one of only two teams to be WWF, WCW and International Wrestling Grand Prix (IWGP) Tag Team Champions (Bubba and D-Von Dudley reached the milestone after the WWF/WCW merger, so there is less acclaim for their achievement).

As the third version of the Midnight Express, Eaton and Lane continued the team’s legacy of winning under the management of the legendary, tennis racquet-wielding Jim Cornette. With big victories over Arn Anderson & Tully Blanchard and The Road Warriors, The Midnight Express was a mainstay in wrestling during the 1980s.

But honestly, the coolest thing about this tag team was their entrance music: Georgio Moroder’s “Chase” from the movie “Midnight Express.” Nice.

The Eliminators played in integral role in professional wrestling’s hardcore revolution started by ECW mastermind Paul Heyman. Heyman discovered Saturn and Kronus on tour in Japan and they came back to the states as two of the scariest guys you’d ever want to see in wrestling briefs. As a combination of brute punishment and high-risk ability (especially from Kronus, the bigger of the two), The Eliminators became celebrated champions in ECW. Their finisher, Total Elimination, was a combination leg sweep and roundhouse kick. Regardless of how “fake” wrestling is, watching these guys do it definitely made me want no part of it. Ever.

Formerly rivals, “The Whole F’n Show” and “The Homicidal, Suicidal, Genocidal Maniac” came together under the management of referee Bill Alfonso. Rob Van Dam and Sabu could be considered the Ryu and Ken of professional wrestling in that they had very similar styles, interchangeable move sets and were frequently the subject of debate as to who was the superior worker. And any limitation in their technical skill was compensated for by their athleticism and refusal to consider any risk too dangerous. They were so entertaining that it made most ECW fans forget that Bill Alfonso was one of the most annoying managers in the history of wrestling. Well done. 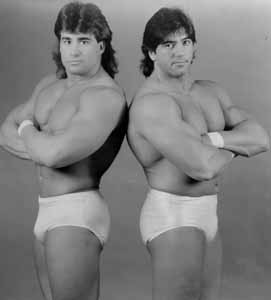 Wrestlemania III was the first major wrestling event that I ever saw. I was 5 that year, and only really liked about five guys: Hulk Hogan, “Superfly” Jimmy Snuka, Big John Studd, The Junkyard Dog and George “The Animal” Steele. So when I saw the opening match of Wrestlemania III, the tag team action that I saw taught me that there was plenty more talent to enjoy. And I owe it to The Can-Am Connection.

Martel and Zenk were only together for about a year, and that Wrestlemania III match was only one of two of theirs that I saw, but their role as my ushers into the WWF writ large is indelibly etched in my mind. Their youth, energy and speed all overflowed in front of the record-breaking stadium audience, and it all cascaded into my living room as I watched the videotape of the event with my parents. Here’s to you, Can-Am Connection: you made the list mostly on nostalgia points, but you should still be proud of that. Hell, it’s not like The Killer Bees made it.

Past and present talent pools considered, I’m going on record to say that there is no tag team of brothers as badass as The Briscoes. Most well known for their work in the third-tier promotion Ring of Honor , Jay and Mark have honed a masterful blend of power, speed and teamwork that strikes fear into opponents that are twice their size.

They might only have about 20 teeth between them, but would you want to scrap with guys who clearly have the experience for it? I became a fan of these guys while attending a Ring of Honor show at Manhattan Center. And when I found out that they are from Delaware, my allegiance strengthened (MDM insiders know why). If you’re a wrestling fan who only gets your fix from cable television, make a point to seek out these guys when they come to your town.