Of course, our societal gender dynamics dictate the exaggerated representations of humanity on screen. So strength and heroism in action movies typically fall under the charge of male protagonists. “Die Hard,” “Rambo,” and “Dirty Harry” come to mind as immediate examples of how women have often been passed over as heroic figures in America’s most profitable movie genre.
The more memorable attempts to push back on this paradigm are “Tank Girl,” “Barb Wire” and the “Charlie’s Angels” series. But all of these features contained a self-aware irony that stripped them of any strength they could have had. If each movie had contained an aside where the character broke the fourth wall and said, “Remember, everyone. I’m a girrrrrl!” I wouldn’t have been surprised.
But fear not! Hollywood has managed to bring characters to life who unapologetically exhibit unadulterated kick-ass despite, and in spite of, their place in the gender hierarchy. This Thursday’s Top goes to my Favorite Action Heroines, who succeed in making you simultaneously remember and forget that they are part of the fairer sex (what does that expression even mean?). 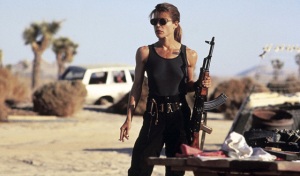 Why Hollywood didn’t cash in on the formula of mediocre-woman-finds-out-what-she’s-really-made-of after the success of “The Terminator” is beyond me. Although this action/thriller made Arnold Schwarzenegger into the household name he is today, audiences must remember that Sarah Conner exemplified character evolution as an unlucky waitress turned badass, the kind of range that Schwarzenegger didn’t exhibit until later in his career. Also, when telling the story of unlikely heroics in the face of insurmountable odds, who better in the 1980s than a single woman in her 20s? Sarah Conner turned “The Terminator” into a stronger statement for women rising above than “Working Girl” and “Baby Boom,” in which those themes were clearly a priority. And to top it all off, Linda Hamilton was way sexier than Melanie Griffith and Diane Keaton (and not just because they made that dreaded shoulder pads mistake).

What can be said about Angela Bassett that hasn’t already been said? Ever since she first brandished her well-sculpted guns in “What’s Love Got To Do With It?” audiences have known that her physique could embarrass most men. So it was only right that she got the opportunity to further exhibit her strength and kick-assery as ‘Mace’ in the near-futuristic action/thriller “Strange Days.” In essence, ‘Mace’ plays the Kato to a far more incompetent Green Hornet, played by Ralph Fiennes. She saves the day by demonstrating both physical and emotional strength that is crucial to the story, serving as the catalyst for both the action scenes and romantic subplot. And it’s her femininity that makes it possible for her to singularly bridge the gap between what turned “Strange Days” from a mindless non-stop action movie to a thought-provoking thriller with a satisfying turn of events.

Moviegoers should have known that the future was bright for Milla Jovovich after she made her action/sci-fi bones in “The Fifth Element.” Thankfully, writer/director/producer Paul Anderson recognized Jovovich’s talent and made her the star of the “Resident Evil” movie franchise. To date, “Resident Evil” holds the crown for best movie/movie series adapted from a video game. And  Jovovich’s portrayal of Alice, the genetically-altered, weapon-wielding heroine stands as the perfect example of how an actress can be a quiet stoner (“Dazed and Confused”), a pathetic hooker (“He Got Game”) and a kick-ass zombie killer all in the same career. Such range is what keeps actors working, and I’m already looking forward to her work in the fourth installment of “Resident Evil.”