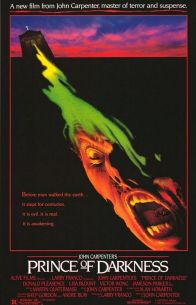 With so many sci-fi, action and horror movies to his credit, filmmaker John Carpenter would have to have made a few that fell short of the mastery apparent in “Halloween” and “Big Trouble in Little China.”

One such instance is the focus of today’s review. “Prince of Darkness” depicts the battle between a team of scientists, a priest and evil incarnate. The uncommon pairing of faith and science is where the potential of this movie lies. But, a lot like “The Da Vinci Code,” the outcome turns out weird and far less interesting than the implicit promise.

The beginning of the viewing experience is hopeful enough. A compelling theme rests on the back of a seemingly capable cast, including Donald Pleasance (“Halloween”), Victor Wong and Dennis Dun (“Big Trouble in Little China”) and an absurdly 80s-mustached Jameson Parker (“Simon & Simon”). Unfortunately for the actors, the writing and execution of the story make for paper-thin support beneath them.

So the Catholic Church has a secret: the Brotherhood of Sleep (a group within the Church) has kept the anti-Christ in a glass canister since before the time of Jesus (Apparently, Jesus found out about it, and that’s why the Romans killed him. Hmph!). When the energy in the canister builds up and threatens to spill out, a priest seeks help from a college professor, who, in turn, enlists his best students and other scientists to study and eliminate the threat. Apparently, the technology up to that point had not been advanced enough to figure out what to do with the anti-Christ.

And, of course, something goes wrong. The canister leaks—nay, spits—some of its contents into the mouth of one of the scientists. And what unfolds is an avalanche-style game of ‘Tag,’ where the evil spreads through the group, pitting them against one another. To make matters worse, they’ve all been barred inside the church because the anti-Christ’s energy has already communicated to the local homeless population (led by Alice Cooper!) that the people inside the church need to die.

So a lot of faux-high science gets blathered back and forth about tachyons, matter and telepathy through time. And in the mess of things, once the anti-Christ finds a host body to help escort him into this dimension (through a mirror!), one of the scientists drags the host body into the mirror, and the priest breaks it, trapping them both…forever…

Except…the scientists continue having the same dream they had while they were in the church, the dream about a dark figure emerging from the church. Only now the dreams feature the sacrificial scientists in its place. Dun dun dunnn! It’s not over! The scientists are the new Brotherhood of Sleep! The end.

While it’s interesting to consider that the Catholic Church manages to drag scientists into its fight, the notion definitely doesn’t carry this movie for the 90-plus minutes that it runs. The moments of conflict, between faith and science, exist in the plot. Alas, the script botches them using cynical humor and a priest who is too scared s___less to contribute anything valuable (which Pleasance does admirably). Short of a few weird Alice Cooper sightings and some cool defenestration, you can go ahead and skip this one.

Sorry, Mr. Carpenter. I know that you wrote and directed this one…but it didn’t work for me. So I’m sure it won’t work for my readers, who are often more critical than I am.

Still, John Carpenter holds the dubious position of my favorite movie director of all time, dubious because none of his movies crack my top thirty favorites of all time (coming to a Thursday near you). He’s like the hall of famer in sports who may have had three or four great moments in his career, but ultimately gets lauded simply for being around for so long. And in that sense, I can forgive a choke or two…or four…I haven’t really counted yet.