LONDON – ’80s pop sensation Rick Astley left the music business with a modest, but respectable legacy in 1993. But the website YouTube prompted his return when the “rickroll” phenomenon took the Internet by storm. Astley capitalized on his renewed popularity by performing a live (lip-synched) rickroll at the Macy’s Thanksgiving Day Parade in 2008.

Currently, Astley is touring with English comedian Peter Kay to promote his new single, “Lights Out,” which hit stores in the UK yesterday. But despite these plans, the “Don’t Say Goodbye” singer made sure not to depend solely on recording music to earn a living.

“After the [Macy’s] parade,” Rick said in an interview, “a man asked me if I would rickroll his daughter’s engagement party. I won’t tell you how much he offered to pay me, but I took the job. You don’t turn something like that down when it could all come crashing around you in an instant.”

Once word got out among the world’s most affluent, Astley’s calendar filled up quickly. Astley’s live lip synch of “Never Gonna Give You Up” was considered premium entertainment at birthday parties, wedding receptions and even board meetings. There was also a job that Astley took because of how bizarre it was: “I was pretty nervous about rickrolling a funeral, but the family assured me that the dearly departed would have wanted it because he always took the piss out of everyone. All in all, it turned out to be a good time. I’d never seen a dance party in a cemetery before.”

Ironically, Astley laid these appearances to rest. As commissions slowed to a trickle, due to the economy and exhausted novelty, Astley walked away from private events to focus on making new music. “It was fun, made a lot of money, and that afforded me to live comfortably while getting ready to get back on top as a solo artist.” Rick Astley is determined not to let “Lights Out” be the last song that he makes. “I’m a fan of irony, but I’m even more a fan of making music more.”

To hear “Lights Out,” courtesy of BBC Radio 2, click on the steely-eyed, handsome face below. 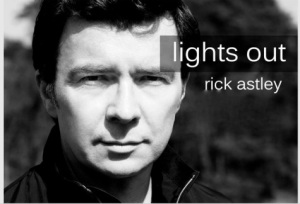