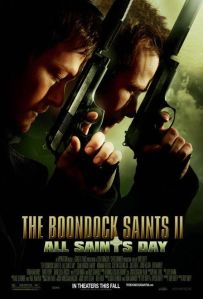 The following is a transcript from a recording that was captured in a confessional booth without the expressed permission of filmmaker Troy Duffy or the Catholic Church.

Troy Duffy: Bless me, Father, for I have sinned. I don’t remember when my last confession was. I drink a lot.

Father Murphy: Go on, my son.

TD: Father, I fancy myself a filmmaker…and well…I made a really, really bad movie.

FM: Did it contain violence? Profanity?

TD: Yes, Father. But that’s not what I need forgiveness for.

FM: Wait—Troy, is that you? JESUS CHRIST, man! I’ve been waiting for you to come in about this. HOOOLY $#!*…

FM: Hold on; I’m not finished…but where does one start, you know? I mean that movie was absolutely terrible! When I first found out about the sequel to “Boondock Saints,” I was pretty excited. The way you skillfully negotiated the line between detached absurdity and a gripping storyline was impressive enough to make the audience want more. And even though a lot of people wrote it off as a ridiculous movie of no worth, I wouldn’t be a man of God if I didn’t admit my enjoyment of life’s many gifts, regardless of objective quality. Can an umbrella purchased on the street not provide temporary shelter from the sun and rain? But I digress.

How in the WORLD did you get so far off track the second time around? I mean, I don’t know what’s worse, making the mob boss an absolute bumbling cartoon or casting Judd Nelson to do it! And don’t even get me started on Julie Benz! Now I can be hot and cold on her generally, but only because I was Antarctic on her in this! What was with the Southern accent? Were you having a laugh giving her the same extra-sensory forensic ability that Willem Dafoe had in the first movie? I’m not sure if that was stupid or just lazy…I’m POSITIVE that it was both!

FM: I’LL say! You may go find a dialect coach for Norman Reedus and Sean Patrick Flanery. Even if they don’t look like brothers, they should at least sound like they’re pretending to have grown up in the same part of Ireland! I don’t think that’s too much to ask.

Now I could continue and make you account for other gross deeds, like making the three Boston detectives into self-aware parodies of themselves, or how the main antagonist is a midget rip-off of Darth Maul meets “Smokin’ Aces” or even how you hired Willem Dafoe for one day of shooting instead of using that money for a rewrite. No, I will not mention these things because doing so would not change your penance.

TD: Yes, Father. And what is my penance? I’ll do anything to make this right.

FM: In the name of the Father, the Son and the Holy Spirit…kill thy self.