Now let me make something perfectly clear: I don’t watch romantic comedies often. In fact, I’ve been coerced into seeing most of the ones I’ve seen and, frankly, I dread the day where that scenario takes place again. However, I would be remiss if I wasn’t honest about the appreciation I have for the honorees of this Thursday’s Top Three. So to the women reading this, and to the men who run and hide from ‘RomComs’ like they would a dentist with Parkinson’s, consider these three features man-friendly:

In short, it’s Audrey Hepburn and ‘Hannibal’ from “The A-Team.” Sold!

Even in a more seedy (more accurate) version of New York City, Audrey Hepburn’s Hollywood portrayal of a call girl would be far classier than Julia Roberts’s could ever be. As for the story, the gratuitously racist elements notwithstanding, an audience could do worse than an unassuming-boy-meets-popular-girl scenario. And while some would bemoan the adaptive liberties taken with Truman Capote’s novella, the effort to make it a happier story proves worth it.

Eddie Murphy in a love triangle with Halle Berry and Robin Givens? I would have financed a project from that 12-word pitch alone.

Does anyone else remember Eddie Murphy’s Hollywood-sexy phase? Feel free to forget that “The Distinguished Gentleman” ever happened, but “Boomerang” is a home run even if you don’t buy Eddie as a beefcake. On top of that, there is something rewarding about watching Halle Berry before Tinseltown decided she could become a superstar. Take those two and throw in Robin Givens, who—although gorgeous—no one in America liked at the time, along with a supporting cast that makes you say, “Everyone is in this,” and you can see why there’s never a dull moment in this movie. In fact, if someone knows one element that this romantic comedy is missing, I’d love to know what it is (‘not enough white people in it’ is not a legitimate grievance). 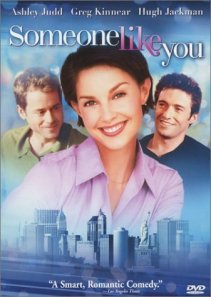 Honestly, the story doesn’t really matter for this one. All a guy needs to know for this one is that Ashley Judd and Wolverine are in a movie together. What else would anyone need?

In case you didn’t know, Ashley Judd is the kind of attractive that doesn’t threaten women, making it the same kind of attractive for which a woman can forgive her man enjoying (FYI: the antithesis of this phenomenon being someone like Megan Fox {yuck}). As for the leading man of this feature, men will be far too busy man-crushing on Jackman to be jealous of their ladies’ enjoyment of the “Boy from Oz.” “Someone Like You” is a win-win.